The Transatlantic Trade and Investment Partnership (TTIP) involves ongoing talks on trade between the EU and the USA. If passed it could have some very serious negative repercussions for Europeans, including the Irish. Many people don’t know of TTIP’s existence however, due to the secretive discussions that take place around it. Janette Lambe of Transition Monaghan explains the issues in more detail.

TTIP – Some of you may already be aware of it but worryingly, others may have never heard of it. For the latter:  TTIP stands for the Transatlantic Trade and Investment Partnership which has been in discussion between trade representatives of the EU (including Ireland) and the US since 2013. If you have not heard of TTIP it may be because all discussions take place in covert. 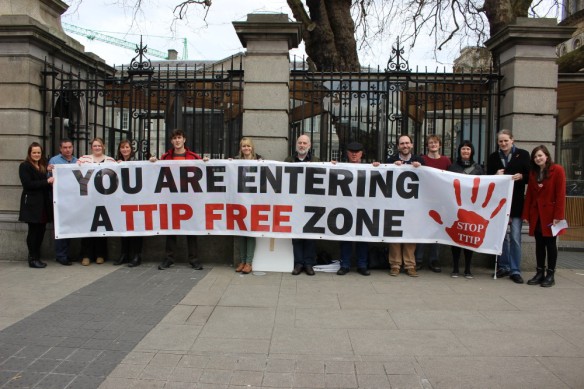 The most commonly mentioned aim of the partnership is to loosen trade barriers between the US and EU. According to TTIP advocates this would boost our economy by increasing international business and in turn create more jobs. However, Ireland already has a very healthy trade relationship with the US, so why the need for a trade agreement?

TTIP has a very sinister flip-side. If passed it leads to the standardisation of regulations in areas such as the environment, food quality, government policies, health care, employees’ rights etc. European standards would be lowered to meet those of The US.

In Europe and in Ireland especially, we pride ourselves on our rigorous food safety and health regulations. Stateside however, it is not uncommon to find chlorinated chicken on the supermarket shelves or meat pumped full of cancer-causing hormones. An overwhelming 70% of US food is genetically modified. European food standards keep GM foods to a minimum.

The American meat industry processed 33.2 million cattle in 2013. In contrast Ireland currently only has the capacity to process 1.1 million per annum. If TTIP goes ahead, it is probable that our beef industry will be stifled by the American beef market. Also the sheer volume of beef the US can process is an indication of the emphasis on quantity, not quality there. It also raises questions about the level of compassion shown towards the vast majority of livestock that are slaughtered.

Another objective of TTIP is the establishment of Investor-State Dispute Settlements (ISDS) which permits international corporations to sue governments if their policies inhibit the potential for corporate profit. The ruthlessness of ISDS has been witnessed in various parts of the world including Uruguay (under the similar Trade in Services Agreement – TISA). As part of a decision to increase health awareness, the Uruguayan government enlarged the health warning graphics on cigarette packaging. ‘Philip Morris USA’, the American tobacco corporation is now suing the Uruguayan government for millions of dollars, as the enlarged health warnings discourage potential purchasers of ‘Philip Morris’ brands. In effect this is suing an elected government for trying to promote better health to its populace. Since then Uruguay has left TISA after strong protests from its citizens.

TTIP would have detrimental effects on our environment. If Ireland agrees to the partnership, the probability of fracking will become imminent. Ireland has the second smallest forest coverage in Europe and fracking would have the potential to destroy what natural beauty we have left. Our water would be at high risk of gas contamination, natural habitats could be obliterated and our democratic nation would be powerless to prevent it. To change environmental policy would inhibit corporate profit and to inhibit corporate profit is to be sued. Where is the democracy in that?

I am both perplexed and saddened by the Irish government’s show of support for TTIP.

These words were written in the 1700s. Three centuries later and little has changed!

This is merely the ‘tip’ of the iceberg. There is a plethora of TTIP material online. There are also many online petitions you can sign to show your opposition. I urge you to write letters to TDs, start a petition, write an article – make your voice heard. Help us hold on to our democracy. As we are being reminded daily through this year’s 1916 centenary celebrations, we fought for it for long enough.

March and April noticeboards can be found here and here