Bats are a vital part of our native wildlife and an excellent indicator of the health of the natural world around us. Pat Merrick of Castleblayney Tidy Towns and Liam Murtagh of Transition Monaghan recently undertook a local survey of one of eleven species of bats in Ireland. Daubenton’s Bat, which is also known as the ‘water bat’ (or ‘ialtóg uisce’ in Irish) was detected at a number of points on the Clarebane River near Castleblayney. Liam now tells us more about this unusual bat and how they were detected.

We are used to bats flying around houses at dusk. The Daubenton’s Bat is not among such bats. You need to go to a river, lake or canal to find it. It is then easily recognised in flight by its low level flight a few centimetres above the surface of the water. It skims like a hovercraft above the water in search of caddisflies, mayflies and midges, and may even scoop prey from the water surface using its big feet. A Daubenton’s Bat can even swim if it makes a mistake and ends up in the water. It roosts in crevices in stone bridges and rocky outcrops. When bats go hunting, they use echolocation which is an ultrasonic sound, which we humans can’t hear. A bat detector facilitates us to eavesdrop on these hunting calls and it also helps us know that they are flying as it can be difficult to see them as darkness fall.

A Daubenton’s Bat in flight over a river

All bats in Ireland are protected species. Bat Conservation Ireland is an all-Ireland charity that promotes the conservation of bats and their habitats.  In early July Monaghan Tidy Towns Network in association with Inniskeen Tidy Towns hosted a Daubenton’s Bat workshop in Inniskeen. The workshop was delivered by Dr Tina Aughney of Bat Conservation Ireland and attended by Tidy Towns volunteers. Those attending were briefed on how to conduct a local Daubenton’s Bat survey. A bat detector was supplied to each group of volunteer surveyors. The survey involved walking a 1km stretch of river on two nights in August – once at the start of the month, and once at the end – and stopping every 100m to observe the water for 4 minutes and counting the number of bats which pass low over the water’s surface. The survey can only commence  at dusk – at least 40 minutes after sunset. 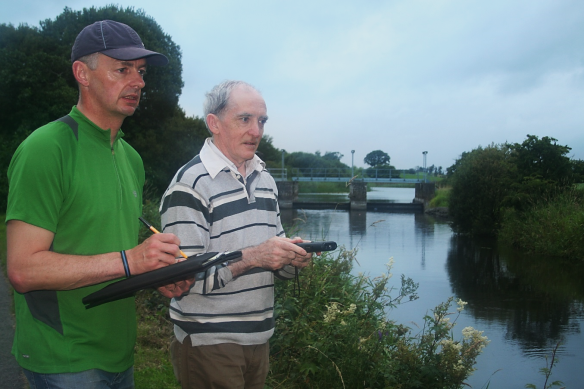 The survey of the Clarebane River involved us surveying a 1km of river downstream of the Water Extraction Works as the river emerges from Lough Muckno and as far as Clarebane Bridge which is near the border with Co Armagh. With the assistance of the bat detector and our torches we saw and heard a number of Daubenton’s Bats flying over the river. They were only present on the stretch of river close to the Water Works and on another stretch near the old stone Clarebane Bridge. We were relieved that we actually found some. The results of this survey are now being collated by Bat Conservation Ireland along with survey results being submitted from other parts of Ireland. The collated results will give a picture of how Daubenton’s Bats are faring nationally. For further information on bats see http://www.batconservationireland.org.

Collecting seed from our Native Trees

Pictured above is John McKeon (on ladder) along with some of 30 participants on Transition Monaghan’s Seed Saving event in Castleblayney on Sunday last. Seeds were collected from a number of our native trees and John then demonstrated ways of storing and sowing the seed.

A list of October events can be found by clicking here