Will Budget 2016 help in preparing Ireland for the low carbon / low energy future that is needed to deal with climate change, now regarded by many scientists as the greatest threat facing humanity? An Taisce says that in the Budget there is no overarching vision to dramatically transform our transport, housing, energy and agriculture sectors towards genuine sustainability or serious investment in adaptation to the projected impacts of climate change. One measure that was welcomed by An Taisce was the move to commit extra funding to the ‘Better Homes’ Programme as a start in improving the efficiency of our total housing stock but the organisation says that there is much more to be done.

Charles Stanley Smith, spokesperson for the Environmental Pillar a coalition of 28 Irish national environmental NGOs said: “The stabilisation of Ireland’s finances in recent years has been commendable but it will count for little if we fail to prepare our communities and businesses for future shocks. Ireland’s commitments around climate change mean that we must prepare now for a low energy world now. We need a new type of politics which moves away from the shortsightedness of the five year electoral cycle and works to deliver a better Ireland for our children and theirs.”

The Environmental Pillar welcomed plans to substantially increase the development of new housing as necessary given the current housing crisis. However it is calling on the Government to build this new wave of housing stock to passive house standard as it will “mean that that those living in these new houses will benefit for many years to come from low energy bills”.

How do you Imagine Monaghan’s future to 2116?

What do you think are the big challenges that we in Co. Monaghan will face in the next 100 years? What sort of county would you like to live in in 2116? As part of Monaghan Co. Council’s 1916 commemorations, Transition Monaghan will be organising an event entitled ‘Re – Imagining Monaghan’s Future’.  With the broad theme of sustainability in mind, we will host an interactive, fun and thought – provoking day of workshops along this theme, with a strong arts, cultural and action planning focus. In order to put together an event which is of interest to as many people as possible, we are inviting members of the community to have their say on what type of workshops or content interest them. We invite anyone who would be interested to attend a planning workshop on Saturday, 7 November, from 11am to 1pm in the Market House, Monaghan. Ideas and suggestions put forward will help us shape the final event. We are keen to ensure that our 2016 event is inclusive and reflects the diversity of groups, talents and viewpoints in Co. Monaghan. We hope to collaborate with others in the community who make this event happen. This might mean taking part in a performance, or by hosting a talk, performing a sketch or musical piece or doing a demonstration. For further information email transitionmonaghan@gmail.com or call 086 865 272.  More details will be posted on www.transitionmonaghan.org and on Facebook. 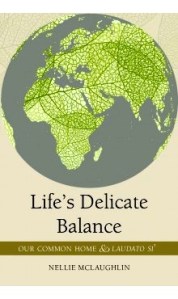 Life’s Delicate Balance: Our Common Home & Laudato Si’ is just published and available in Veritas bookshops. The author Sister Nellie McLaughlin is a Mercy Sister based in Donegal – she launched the book last week in the Veritas Bookshop in Derry. According to the publisher the book “exhorts people everywhere to pay heed to the Pope’s call to save our planet from destruction. With core questions included for reflection and action, this clear and concise book is an urgent and timely wake-up call in its own right.” The book is an 80 page paperback and is priced at €7.99. We will review Life’s Delicate Balance’ in this column in the coming weeks.